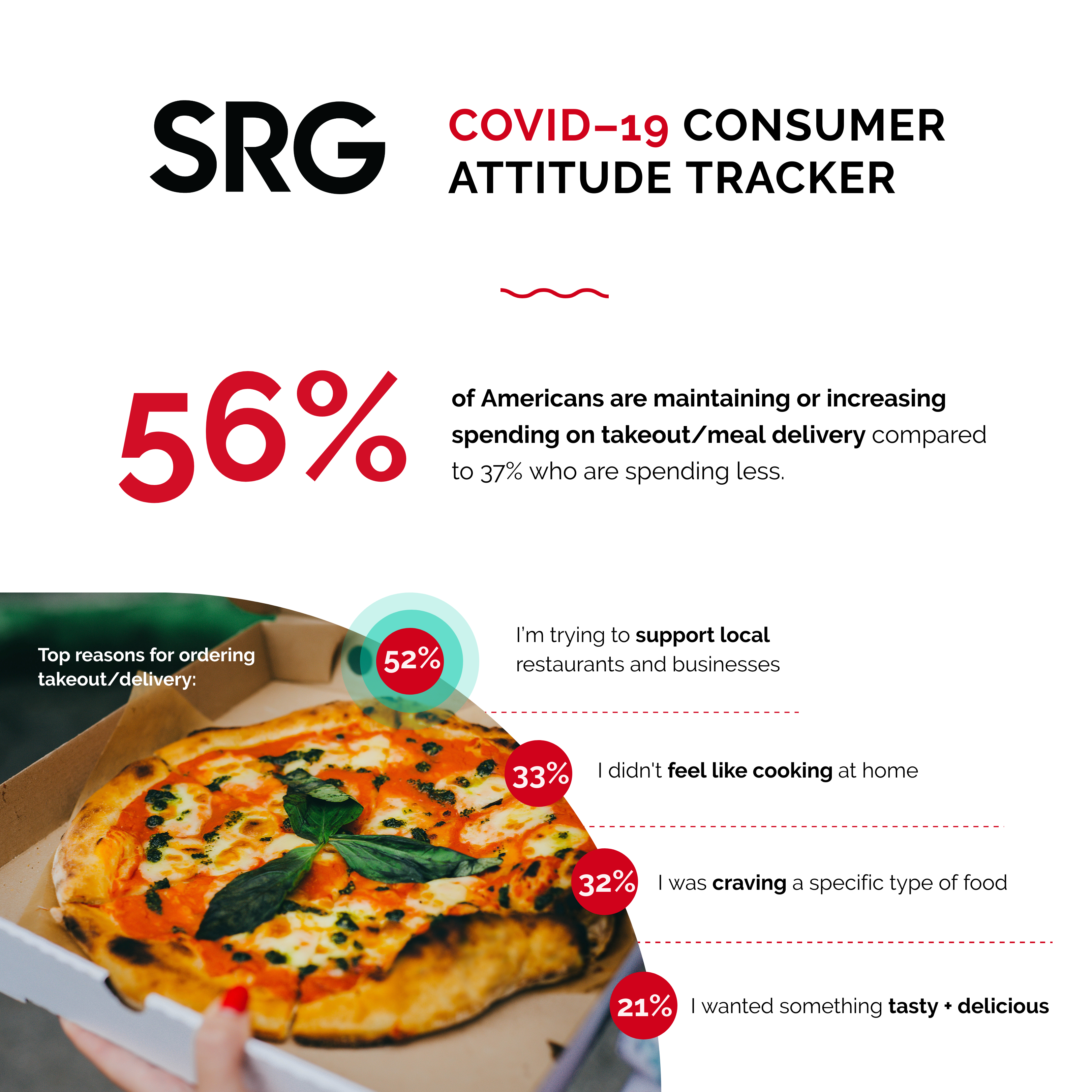 While American’s concern about the impact of the coronavirus continues to accelerate with personal health and job security at the top of their minds, the majority of consumers are also looking for ways to support their local community’s and in particular their neighborhood restaurants. These are among the results of week-three of an ongoing weekly tracking study of 200 Americans across the country conducted by the Sterling-Rice Group (SRG).

“During this time in which the restaurant industry has seen huge declines in dine-in volume, it is encouraging that more than half of our respondents said they are maintaining or increasing their takeout and delivery spend,” explained Cindy Judge, CEO of SRG. “They are doing  this for all the ‘usual’ reasons  such as convenience, taste, or something they crave. Our data says they are also doing it in support of their local restaurants. We believe the  emotional bond  between restaurants and their consumers may be strengthening as we weather the COVID-19 crisis.”

The third week of findings also reveal a double digit increase in the number of Americans who are extremely concerned about COVID-19 with 45% saying they are extremely concerned compared with only 14% three weeks ago. Nearly 40% of Americans report that stress or lack of control is the dominant emotion they are experiencing now. While the health of loved ones and the impact of the economy top of the list of worries, week three showed a 12% point increase in concerns about one’s own personal health.

The study also demonstrates that grocery shopping behavior continues to show big shifts. SRG notes that shoppers are flocking to the center of the store, becoming less price sensitive and increasingly buying online. Some 60% of consumers say they are purchasing more shelf-stable or frozen foods, a figure that has tripled from the first wave. The number of consumers shopping online has also tripled from the first week to 27% in week three. And 37% are playing less attention to price, a 5-times increase in the last two weeks.

The SRG Consumer Attitude and Behavior survey is being fielded on successive Wednesday mornings in March beginning March 11 among 200 Americans across the country. The sample is nationally representative of the US population – balanced to age, gender, ethnicity, income and region.

Headquartered in Boulder, Colorado, SRG is a nationally recognized brand consultancy and creative agency. The agency has expertise in consumer and B2B insights, brand strategy and positioning, new product innovation, advertising, culinary and design. SRG has been ranked on Outside Magazine’s Best Places to Work list for the past nine years and was also recognized by Ad Age as a 2016 and 2017 Best Place to Work.

The Almond Board of California is rolling out an advertising initiative from longtime agency partner Sterling-Rice Group. The new campaign... read more
AGENCY: ,

Seemingly overnight, the food and hospitality industry has had to pivot drastically, facing a multitude of issues fueled by a global pandemic that... read more
AGENCY: ,

The U.S. Highbush Blueberry Council (USHBC) has contracted with the Sterling-Rice Group (SRG) to lead its integrated foodservice marketing and... read more
AGENCY: ,

Sterling-Rice Group will once again host a battle between local natural food industry executives who will face off in a cook off to see if they... read more
AGENCY: ,
See more News