Washington Lottery - "Cake It To The Limit. And Beyond"

At Wunderman Thompson we exist to inspire growth for ambitious brands. Part creative agency, part consultancy and part technology company, our experts provide end-to-end capabilities at a global scale to deliver inspiration across the entire brand and customer experience.
We are 20,000 strong in 90 markets around the world, where our people bring together creative storytelling, diverse perspectives, inclusive thinking, and highly specialized vertical capabilities, to drive growth for our clients. We offer deep expertise across the entire customer journey, including communications, commerce, consultancy, CRM, CX, data, production, and technology.
In 2020, Wunderman Thompson launched Inspire, a proprietary global platform that explores what makes brands inspiring and what inspires consumers. Rooted in a rigorous, multidimensional research methodology, the platform identifies the qualities a brand must embody, the narratives it should weave, and the experiences it can design in order to spark people’s inspiration, and culminates in an annual list of the Inspire Score Top 100 Most Inspiring Brands in the World.
Wunderman Thompson is a WPP agency (NYSE: WPP).
For more information, please visit us at www.wundermanthompson.com, subscribe to our newsletter, and follow Wunderman Thompson on our social channels via Twitter, Facebook, LinkedIn, and Instagram. 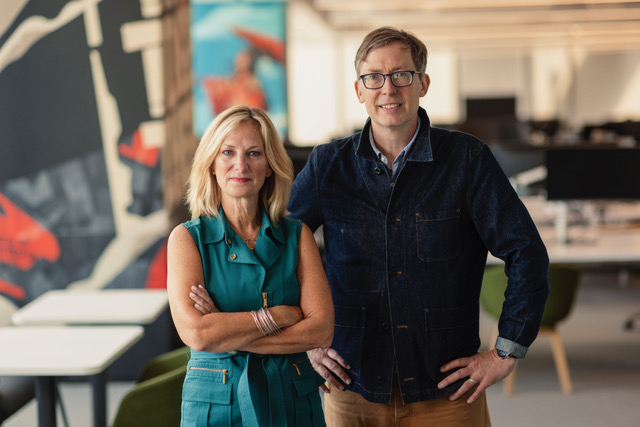 Audrey Melofchik, CEO of Wunderman Thompson North America, announced today that top creative talent Tom Murphy will join the agency as Chief Creative Officer. Known for his track record of creative excellence that drove McCann’s most celebrated work of the past decade, including the iconic “Fearless Girl”, Tom’s access to Wunderman Thompson’s toolbox of end-to-end capabilities will inspire endless ideas and solutions to impact its North American clients.

Tom has spent 16 years at McCann, most recently as North American CCO and has influenced creative talent and effective work over the course of his career. His work has impacted brands including Verizon, Mastercard, Microsoft, Ulta Beauty, Lysol, Mucinex, MGM Resorts, NY Lottery, USPS, and HomeGoods.

He will report to CEO Audrey Melofchik. Wunderman Thompson’s Global Chief Creative Officer, Bas Korsten has been acting NA CCO for most of 2022.

During Tom’s tenure at McCann, he oversaw some of the most talked about and award-winning ideas of the past decade ranging from “Fearless Girl” for State Street Global Advisors, “True Name” campaign for Mastercard, “Universal Love” for MGM Resorts, “Generation Lockdown” for March for our Lives, and “Changing the Game” for Microsoft - which centered on the brand’s adaptive Xbox controller that makes gaming accessible to players with disabilities. He originally joined McCann as a group creative director in 2004, from DDB Chicago, where he worked on top brands McDonald's, Budweiser and Bud Light.

“Growth challenges facing clients today require an agency partner steeped in expertise across their entire ecosystem with creative firepower to ignite it in completely new ways,” said Audrey Melofchik, who became CEO of Wunderman Thompson North America in 2021. “From the moment I met Tom, I knew he was the perfect partner to lead WT NA as we blaze a trail of inspiring creativity and growth with our client partners. He is an amazing thinker, leader and human being.”

Wunderman Thompson North America is enjoying momentum with a series of new business wins including Snap and Courvoisier while expanding its portfolio of work for Pfizer, Samsung and Walgreens. The agency also recently won the Foundation to Combat Anti-Semitism account (beating Droga5 and BBDO in a review), an integrated campaign which will launch in January 2023. In June, Wunderman Thompson was awarded the first BtoB Grand Prix at Cannes for Sherwin-Williams Speaking in Color, a voice-activated AI color system.

“Tom coming on board is a testament of our future-forward creative ambitions for clients that we have as Wunderman Thompson in North America, as well as globally. He has proven himself as a powerful and inspiring creative leader that can impact business and culture,” said Bas Korsten, Global Chief Creative Officer, Wunderman Thompson. “I really can’t wait to see how Tom is going to inspire our ambitious clients and our people. He is the real deal.”