DESIGN PLUS: HOW CLAIRE BRIDGES CAN MAKE YOU MORE CREATIVE

Claire Bridges is the author of In Your Creative Element, a book that delivers “a formula for creative success in business”. Here she shares some of her secrets for unlocking creativity.

When you teach creativity, the question you inevitably get asked all the time is: “But can creativity really be taught?” Claire Bridges has a very clear answer, which I’ll get to a little later. But first I have another question. We’re often told that children are naturally creative. So what happens? How does life leach the creativity out of us?

“I think it’s because children don’t know the rules yet,” she says. “They can colour outside the lines, they can make the sun purple or a tree pink. A teacher actually told a friend of mine’s child that her painting was ‘wrong’ because her trees were pink. That’s when it all starts. Once we think we have to follow the rules, once we have constraints, we start colouring inside the lines.”

So the secret is to resist – you may have a brief and a budget, but don’t let them straightjacket you. Also, says Claire, don’t let others undermine you.

“The teacher incident is really telling. One of the things that creativity thrives upon is confidence. People lose confidence in their ability to be creative, when in fact we’re all inherently creative. I’ve actually heard about a meeting where a creative director told someone to shush when they were about to suggest an idea. That kind of thing really puts the brakes on creativity.”

Claire didn’t think of herself as creative at the outset of her career. She comes from a consumer PR background and at one point found herself typecast as the “sensible, rational” figure in an outfit of mavericks. In her next job, however, she was pegged as the creative person. “Creative and insights director”, to be exact.

“Once I had the word ‘creative’ in my job title I had a sort of imposters’ syndrome, which drove me to study creativity more formally. I read everything I could get my hands on.”

This led her to Cass Business School in London, from which she emerged in 2015 with an MSc in Innovation, Creativity and Leadership – one of only 55 people in the UK to hold the qualification (and the only person in the PR sector).

The groundwork for her book, In Your Creative Element, was done here. The book is based, rather cleverly, on the periodic table of chemical elements. Appropriately, the inspiration came from an unexpected source. 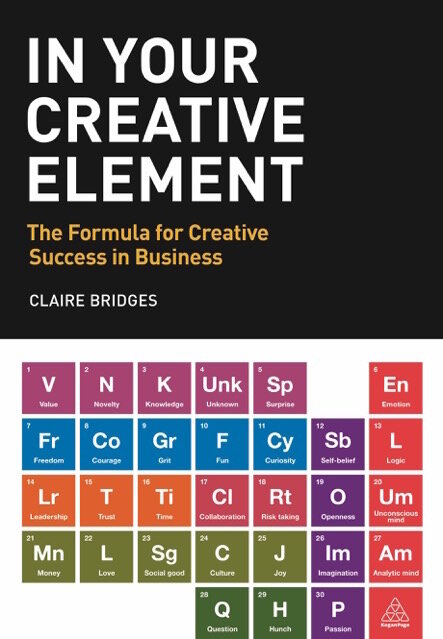 “When I needed to relax I was binging on Breaking Bad box sets,” she says, referring to the TV series about a high school chemistry teacher who becomes a drug dealer. “So I’d go to bed with all these chemical formulas floating around in my head. I realised that the periodic table gave me a structure. When you’re starting with a blank page, a structure can be useful.”

Claire’s book would mirror the periodic table, with nine groupings (or chapters) and 62 elements. “The original periodic table was about using known elements to predict unknown ones; I liked the idea of using a framework that combined the known and the unknown, which for me is the essence of creativity.”

But the book doesn’t just sit on shelves waiting for readers. Claire uses the ideas inside on a daily basis for clients of her consultancy, Now Go Create. For her, there’s clearly no question that creativity can be taught.

“If you’re faced with a challenge or a blank page, there are processes that can help you break the deadlock. In fact there’s a whole toolkit at your disposal to help you overcome the situation of ‘I need an idea and I need it now’.”

UNLEARN WHAT YOU KNOW

Sometimes the best way of solving a problem is to look in the opposite direction. One of my favourite quotes in the book comes from actor and Monty Python member John Cleese, who says: “We don’t know where we get our ideas from. What we do know is that we do not get them from our laptops.”

Getting out and about – wandering, being curious, seeking new stimuli – is a classic way of gathering creative fuel. Or as Claire puts it: “Habit is a creativity killer. Let’s say you’ve been working for the same client for a long time: you may find yourself stuck in a rut and unable find a new angle. That’s because neural pathways have been formed, so you’re always going down the same groove. What tools and techniques can do is take you on a mental detour. They can help you unlearn what you know.”

During her Now Go Create sessions, Claire often takes people out of their workplaces – on “creative safaris” where they can seek inspiration from the world around them – but she adds: “There is a hard reality to creativity, particularly in business, which is that sometimes you are going to be in a cold grey room and you have to be creative no matter what.”

That’s why her courses often tackle genuine briefs. Her clients, she points out, are looking for an edge over their competitors, whether they are a clothing retailer, a drinks manufacturer or a sponsorship agency. “Their currency is ideas, and what they want out of this is better ideas.”

So if we had to combine three elements from the book to make ourselves more creative, what would they be? Claire protests that different people require different elements. “Having said that, if you combine curiosity, self-belief and grit, you’re getting there.”

Curiosity means not being satisfied with the status quo; and not being afraid to ask questions. Self-belief is about the confidence to carry on, to stay true to your idea. And grit is the ability to overcome setbacks, to pick yourself up when things don’t go your way, and to keep working until the job is done.

So there you have it. Claire has set you on the right path. Now go create.

The World Is Not the Same: Paul Blockey, RAPP