This week, I’m back with another crypto-focused article that tells the story of how one man is merging his passion for poker with a lucrative NFT project of his own. DecentraDegens is an NFT project unlike any other, and the creator, Sam Sargent, shares his experience and offers business advice of his own. As we embark on an exploration of all the project has to offer, let’s break down some terminology for those unfamiliar with the NFT world.

NFTs (non-fungible tokens) are cryptographic assets that exist on a blockchain. Each NFT has a personal code that distinguishes one from the other. Since each one is unique, NFTs cannot be traded or exchanged with “equivalency,” which is where the non-fungible part comes in.

Similar to cryptocurrencies, NFTs are seen as the natural evolution of world finance and could be seen as the herald of something called “Web 3.0,” but what does that mean? Web 2.0 is the current iteration of the internet as we know it. The evolution of Web 1.0 to 2.0 led to increased interactivity and the ability to share information instantaneously across the world. Web 3.0 is seen as the next step in the web’s evolution. A major characteristic of Web 3.0 is the decentralization of many processes, and that’s exactly what NFTs are spearheading with financial assets. 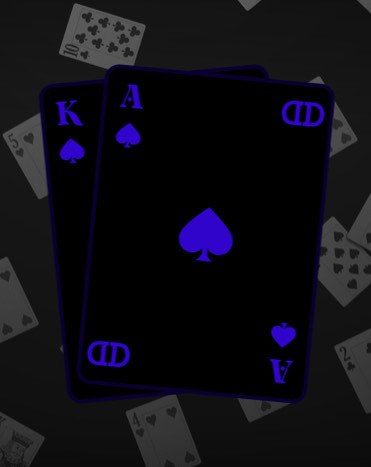 This is a sample of the DecentraDegens NFT artwork. Photo courtesy of Sam Sargent. DecentraDegens: Standing out in the Crypto Space

DecentraDegens is an NFT project that is fostering a community of passionate poker players. Here’s how it works. People purchase an NFT with a picture of a poker hand, each one being a unique combination. This one-time purchase grants access to weekly online poker tournaments for the rest of your life. Real money can be earned while having fun with others.

Being a recent college graduate, Sam has already begun to forge his own path in the business world. Breaking into the crypto space can be challenging with the oversaturation of people trying to capitalize on the new medium, but as mentioned in last week’s blog post, the key to success is to be unique. Examine what other people are doing and how it can be altered to cater to different audiences.

A year ago, Sam discovered an NFT project centering around online horse racing. This allowed people to own in-game horses and make money, just like they would in real life, but in a more accessible way. It was eye-opening to see that NFTs were much more than cartoon images.

Capitalizing on a poker niche has given the project a distinct identity. Development began last December and the project officially launched in February. Within that span of time, the project has seen considerable growth.

Most updates and communications are done over the project’s official Discord channel, which has 368 members. 60 people have already purchased from DecentraDegens, with a total of 78 mints of the NFTs being sold. With any growing business venture, there come challenges, though.

The biggest challenge for Sam is selling people on the concept of NFTs. When thinking of NFTs, the infamous Bored Ape comes to mind, but there’s more to it than just that. In the case of Sam’s project, it’s easier to make the pitch by focusing on the poker aspect. For instance, paying $200 upfront for an NFT that will grant you access to weekly tournaments forever is a great sell for poker players.

Sam said, “It’s much easier to explain the value of NFTs when you’re able to attach a sense of utility or purpose to it, instead of just one of these pictures that sell for a lot.”

Instead of selling NFTs on the secondary market, Sam wants people to get money from participating in the community. Purchasing an NFT from DecentraDegens will grant you lifetime access to weekly poker games as long as you own it. These weekly games offer plenty of opportunities to make money and have fun with others in the community. This can be taken a step further. Through NFT smart contracts, people are able to borrow NFTs from each other, which is a great way to make more money.

Later down the road, Sam would like to give people the ability to sponsor others in poker tournaments. For investors not interested in poker, this is a great opportunity to make passive income. If someone borrows another person’s NFT to enter a poker game, the money they make will be split back with the owner.

Plans for the Future & Advice for Success

An immediate goal for DecentraDegens is to develop an app where people can play poker on the go while also being able to connect their crypto wallets. With the revenue generated from running poker tables, Sam plans to give back to the holders by gifting real-world items, such as branded merchandise and even flying tournament winners out to Las Vegas for in-person events.

When it comes to advice for success, Sam said, “I think the most important thing is to have a rock-solid, bulletproof concept before trying to market.”

Pitch your idea to people and receive feedback on how it can be improved. Sam also stressed the importance of having a niche. Having a business project that centers around something you’re passionate about will make it far easier to discuss the ins and outs of everything.

Supermarkets are some of the most commonly shopped-at stores in the United States. On average, Americans shop at grocery stores 1.6 times per week.... read more
AGENCY: ,

Most of the time when you think of a billboard advertisement, you probably think of commercial usage, like a company showing off its flashy new... read more
AGENCY: ,

Online boutiques are a special niche of clothing companies; they typically offer a curated selection of clothing (usually made for a women-centered... read more
AGENCY: ,

Client Spotlight: Munashe Kaseke – Send Her Back and Other Stories

Send Her Back and Other Stories is a collection of multicultural fiction short stories written by Munashe Kaseke and will be released later this... read more
AGENCY: ,

Alcohol is a big part of adulthood in America; turning 21 is synonymous with drinking, because now a young adult is legally allowed to consume... read more
AGENCY: ,
See more News