The Canadian Cancer Society (CCS) and CIBC are launching a new integrated campaign aimed at encouraging Canadians to “Never Stop Running” and participate in this year’s reimagined Canadian Cancer Society CIBC Run for the Cure on October 4th. The strategic idea behind this year’s run and the campaign was developed in collaboration with global Toronto-based creative agency, Juniper Park\TBWA, and design studio, Le Parc. It includes TV, OLV, radio, digital, and social.

When the world stopped due to the COVID-19 pandemic, breast cancer didn’t. It continues to impact 1 in 8 Canadian women and accounts for approximately 25 percent of new cases of cancer.

The Canadian Cancer Society CIBC Run for the Cure plays an important role in allowing the community to support those affected by breast cancer. Recognizing the current reality of physical distancing, the brand pivoted and reimagined this year’s Run as a hybrid experience with both virtual and physical elements so Canadians can safely participate and raise funds toward breast cancer research and programs. 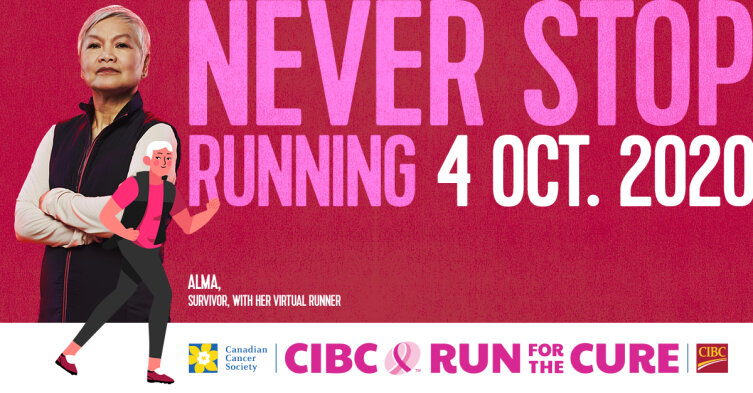 “This is obviously a very different year for all of us. That said, our community of dedicated volunteers and participants weren’t going to let physical distancing prevent them from supporting those affected by breast cancer; “Never Stop Running” is a perfect expression of their commitment and dedication,” says Paula Roberts, Executive Vice-President of Brand Marketing, Communications and Digital at the Canadian Cancer Society. “As well, we know that all those we serve are so much more than their diagnosis – they live their lives to the fullest despite many challenges. Breast cancer can change everything but it doesn’t define who a person is. “Never Stop Running” celebrates that indominable spirit.”

“For 24 years as title sponsor, Team CIBC has proudly supported the CIBC Run for the Cure, raising over $54 million in support of the breast cancer cause,” says Stephen Forbes, Executive Vice President, Purpose, Brand and Corporate Affairs, CIBC. “Although circumstances may be different this year, we know that the efforts of Team CIBC will be as passionate and dedicated as ever.”

CIBC and CCS worked with Juniper Park\TBWA and Le Parc to redesign the Run experience to ensure a seamless transition to a hybrid physical and virtual event. Part of the experience this year allows participants to create an avatar, or virtual runner, to represent themselves ahead of event day.

On the day of the Run, participants are encouraged to complete a 1k or 5k walk or run in their own neighbourhoods, and their avatar will then be rewarded with a medal.

The avatar serves three important objectives: not only does it drive engagement and excitement prior to run day, but it is also a strong fundraising tool to incentivize participants by unlocking additional personalization features when certain goals are achieved. Lastly, it recreates a sense of togetherness by helping people feel part of one overall event and allowing them to recognize other participants.

To reinforce the spirit of togetherness, the Run will be kicked off through an inspirational live-streamed ceremony, allowing the entire country to watch together at the same time - a first for the Run.

"We knew that the 2020 edition of the run would be wildly different from previous years since a large gathering of people was a non-starter. The question was what would it look like and how could we still generate the same level of enthusiasm,” says Andy Linartados, Group Creative Director at Juniper Park\TBWA. “To do so, we created a virtual version of the run that allowed people to participate individually or in small groups. But it still happens on run day. So, we'll 'virtually' all be together."

The avatar concept also inspired a new illustrated campaign, nodding to the virtual nature of this year’s Run while keeping a strong focus on the impact of breast cancer on Canadians’ lives. As with previous years, the team knew it was important to highlight actual cancer survivors, therefore the “hero” characters are based on actual cancer survivors and tell powerful and inspirational stories of real people affected by breast cancer.

“The thinking behind the illustrations and avatar creation for this year’s run was to ensure the virtual runners are representative of the communities in which we live,” says Nathalie Cusson, Creative Director of Design at Le Parc. “For the creative visuals, we created characters that are actual real-life breast cancer survivors, their family members and members of the CIBC support team. When creating the avatars, we developed a variety of elements so that participants can represent themselves in their personalized character.”

The campaign platform also reinforces CIBC’s and CCS’ long-term and unbreakable commitment to the cause and the fact that, this year more than ever, Canadians need to keep running.

Juniper Park\TBWA Brings on New Talent to Accelerate its Continued Transformation Towards Precision Marketing and In-house Production, and Reinforces its Commitment to Diversity & Inclusion
Want to make your company shine?
Showcase Your Work
Add up to 4 pieces of creative work to your company profile.
Boost Your Visibility
Appear above the rest when global brands search for you.
Encourage Direct Contact
Make it easier for clients to reach you by having the right people listed in your profile.
» Switch to a Starter Profile
Start now more info
Otherwise keep editing your FREE page
Any questions?