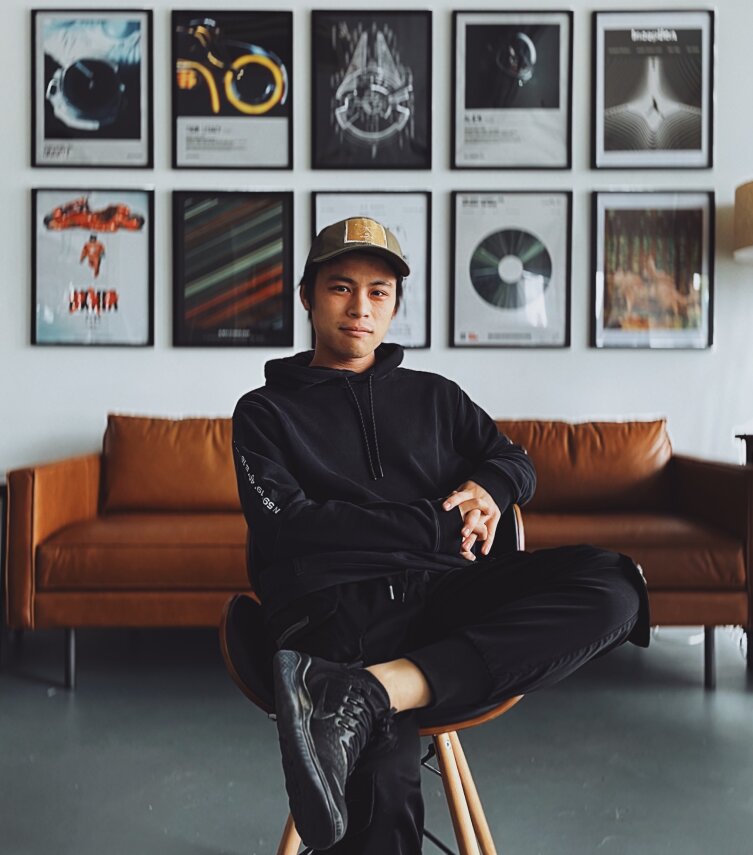 Hailing from New Jersey, Tang draws from his decade-plus background in classical piano to inform his creativity now, with the discipline and attention to detail that piano performance gave him translating into his meticulously crafted films. He creates visually tonal pieces with an emphasis on soundscapes and rhythm. Tang’s taste for epic filmmaking juxtaposed with intimate character portraiture is a distinctive fusion of large and small scales that utilizes all the tools of virtual production to their fullest extent.

He honed his visual language as a cinematographer on projects including music videos for 88rising, Guy Tang, Watsky, and Meg & Dia, along with narrative features and short films that have premiered on Netflix, the Student Academy Awards, and the Telluride Film Festival, among others.

Tang’s constant desire to innovate original approaches to visual storytelling led him to make Many Moons, a film shot during the 2017 solar eclipse. The short features an emotional scene between two characters as the shadow of the moon passes over them in real-time. The shot begins in pure daylight, devolves into the night, and back to daylight entirely in-camera - one example of Tang’s out-of-the-box introduction of new cinematic experiences.

His aptitude with 3D virtual production and mixed reality work utilizes the strengths of both live action and CGI to create visually singular worlds. Tang is currently developing a live action hybrid film, Kodama, that merges contemporary action and ancient samurai culture, fusing the sensibilities of both arthouse and action films.

“I’m so excited to be joining a team that shares the same creative goals and sensibilities as I do,” says Tang. “I have so much respect for everyone here and their approach to the future of filmmaking. I can’t wait to contribute to the exciting work that is being created here.”

“Brian’s excitement for virtual production will elevate the visual language here,” says Joe Sill. “His unique directorial sensibilities and genuine desire to innovate and develop new ways of visual expression will push the team through creative boundaries and build new pieces of striking art. We are thrilled to have him join us.”

Impossible Objects is a world-building lab built by an assembly of artists and engineers who mobilize the power of imagination through design, animation, and sheer will. Our goal is to break the constraints and limitations often associated with storytelling by giving power back to the artist -- offering creative playgrounds and tools for visualists to constantly dream bigger and to always maintain control of their creative ambitions.

TEAM BUBBLY TAPS DIRECTOR MILES WARREN FOR FIRST COMMERCIAL REPRESENTATION
Want to make your company shine?
Showcase Your Work
Add up to 4 pieces of creative work to your company profile.
Boost Your Visibility
Appear above the rest when global brands search for you.
Encourage Direct Contact
Make it easier for clients to reach you by having the right people listed in your profile.
» Switch to a Starter Profile
Start now more info
Otherwise keep editing your FREE page
Any questions?