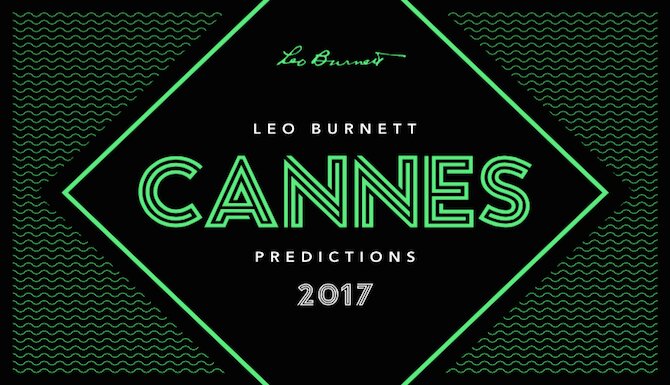 CHICAGO – June 14, 2017 – Leo Burnett Worldwide today published its 30th annual Cannes Predictions of the top 25 contenders ahead of the 64th Cannes Lions International Festival of Creativity, the most prestigious global awards show for agencies and marketers alike. The festival will be held in Cannes, France, from June 17 to 24.

“The body of work in this collection reflects a new alchemy that’s pushing our industry forward,” said Tutssel. “The ideas we can expect to see celebrated this year will be fueled by the collaborative power of creativity, intelligence and technology working together to drive transformational impact for brands.”

The Cannes Predictions list is a compilation of a yearlong evaluation of brand work that reflects global trends fueling the industry. This year, the following six trends shone through under the overaching theme of increased collaboration:

Last year, a painting in the style of Rembrandt for ING earned two Grand Prix. In 2017, fine art promises to return to the big stage, though most likely in the form of sculpture.

On International Women’s Day, a statue of a young girl made a defiant debut on behalf of State Street Global Advisors. Placed to stare down Wall Street’s iconic “Charging Bull” in New York City, the “Fearless Girl” became a clarion call for stronger female representation in the corporate boardroom.

Down under, a grotesque figure called Graham delivered a serious message about road safety. “Meet Graham” for Australia’s Transport Accident Commission was a collaborative effort between an engineer, an artist and a physician that brought to life the incredible features a human body would need to make it crash-resistant. The fully interactive sculpture was taken on tour to highlight human vulnerability from an entirely new perspective.

Beyond sculpture, installations of all shapes and sizes delivered new experiences and innovative ways for brands to engage with audiences around the world.

In Singapore, Nike built the “Unlimited Stadium,” an immersive experience in the form of a 200-meter LED running track that monitored runners’ times with RFID chips. Using this data, the track enabled runners to race against virtual versions of themselves or digital avatars that challenged them to go the extra mile.

To tempt weather-weary Germans to visit sunny Mexico, the Mexico Tourism Board invented “rain” worth celebrating. The “Tequila Cloud” delivered drops of – you guessed it – tequila, as ultrasonic humidifiers vaporized the liquid into a cloud that condensed and actually rained. Synced to local weather data for its Berlin art gallery home, the cloud mirrored real showers in real time.

When Storm Gertrude uprooted a beech tree in Northern Ireland where “Game of Thrones” was filmed, Tourism Ireland came to the rescue. The wood from the felled tree was transformed into ten doors that were hand-crafted to depict storylines from each episode of the show’s sixth season. “Doors of Thrones” were installed in locations across the country, resulting in a unique itinerary for “GoT” enthusiasts.

Social Worth Your Time

From engaging experiences on Snapchat to playing the long game on Instagram, contenders across social media devised inventive ways to grab attention on mediums where the ephemeral is the norm.

Gatorade’s “Serena Williams’ Match Point” leveraged the tennis star’s Grand Slam record run to capture prolonged engagement on a platform known for users with incredibly short attention spans – Snapchat. This multilevel game recreated Williams’ singles titles in 8-bit detail — from the color of her outfit to the details of each location. It was a first for Snapchat, and users spent more than three minutes with the game.

Louise Delage, a photogenic French jet-setter on Instagram, inspired major FOMO with a picture-perfect lifestyle set against a backdrop of glamorous beaches, yachts and swimming pools. Easily missed by her followers were the drinks that were always in the frame. After several weeks, “Like My Addiction” for Addict Aide shocked with a final reveal that encouraged dialogue about addiction and its hidden nature.

Music never fails to catch the ear of juries in Cannes — this year, our favorite tunes are familiar classics with a twist.

In “The Line-Up Song,” Coca-Cola modernized a nursery rhyme to help Egyptians learn the names of players on its national soccer team just ahead of the African Cup of Nations.

Sammy Davis Jr.’s “Yes I Can” got an update in the dazzling “We’re the Superhumans” for Channel 4 Paralympics. Featuring more than 140 disabled individuals performing incredible feats, this anthem of empowerment was performed by The Superhuman Band, a 16-member ensemble of musicians with disabilities. The film was released in conjunction with the 2017 Paralympic Games.

The bar for Film and Film Craft rises year on year. Some of this year’s favorites challenged physics.

The headspinning “Gravity Cat” for Sony Interactive – Gravity Daze 2 is a bizarre and visually stunning experience. A Japanese student laboring over her thesis is surprised when her world flips upside-down, possibly caused by a mysterious feline. In “Stroll,” for Apple iPhone 7, Memphis Jookin star Lil Buck’s strut down a city sidewalk turns sideways when he pops in his AirPods.

A flightless bird encounters a virtual reality headset, sparking a dream of greater heights. In “The Ostrich” for Samsung, a bird refuses to be held back by limitations, and trains night and day to pursue the impossible. Set to Elton John’s “Rocket Man,” one can’t help but cheer when the hero finally takes flight.