The Adforum Business Creative Report helps us acknowledge the most outstanding creative ideas of 2019. Ideas which demonstrate remarkable, exceptional creative thinking. So, let’s take a moment to dis

Congratulations to everyone involved in the creation of the most effective creative campaigns the industry had to offer in 2019, according to Cannes Lions, the Epica Awards, D&AD, the Clios, the One Show, the LIA, , Eurobest, Adfest, Dubai Lynx, New York Festivals, the FAB Awards, the World Luxury Award, Andy Awards - and many more. Can’t argue with that!

Campaigns which are the result of a long demanding process, with endless phases, elements and decisions on the path to glory.
But… what if we went back to the start? Addressing the issue from a completely different perspective: focusing on the initial thinking input, not the end creative output. When doing so, one can notice that underneath the obvious surface many of these unique creative ideas share some common patterns of thinking. Patterns which when identified and mastered, can help understand and inspire new highly innovative creative ideas. We at Mindscapes are infatuated with identifying and decoding such thinking patterns. As you can imagine, for us the BCR is not a report. It’s a playground! So, let’s play and explore the best of the best. Thinking patterns that is.

Replicating a Practice/Conduct was the most popular thinking pattern in work awarded within 3 business sectors: Finance, Retail, Transport & Tourism.  With 3 campaigns spotted in each.
FYI - in BCR 2018 this thinking pattern was embedded in 7 awarded ideas. It has almost doubled its presence in the creative mindset.

Another favorite in the report is the “New Tasking” thinking pattern. Which can be tracked back to 11 of the BCR winners. When attempting to be innovative, we have an intuitive tendency to initiate our thinking by creating something completely new. By trying to add something. Which is a legitimate, potent way to be innovative. But when it comes to storytelling and branded content, many times a more effective way to innovate is by… using what already exists. Re-purposing what is already there. As it has the creative firepower to produce fascinating content. The “New Tasking” thinking pattern reflects exactly that - assigning a new unexpected task to an existing resource in a system, or to a resource which is in contact with the system. Thereby generating an innovative way to deliver a story while providing tangible value to consumers. This pattern helps override a mental block called “Functional Fixedness” in which our mind automatically associates an object or component with its known traditional function. Thereby limiting the way we imagine how it can be used. The key is identifying the right resource within the right system and then assigning it with the right unexpected creative new task.
For example:

Ford Motor Company – “Accessibility Mat” by GTB, Sao Paulo. New tasking the trunk mat into an accessibility ramp.
Volkswagen - "Road Tales" by ACHTUNG! Mcgarrybowen, Amsterdam. New tasking in real-time landmarks outside the car into magical characters in stories seen by kids inside the car.
Samsung Fire & Marine Insurance – “Firevase” by Cheil Worldwide Inc. Seoul, South Korea. New tasking a flower vase into a fire extinguisher. Or maybe it’s the other way around J.
GSK Glaxosmithkline - "Breath of life" by McCann Health Shanghai, China. New tasking the microphone on the mobile device. And new tasking the sound wave it creates.
Lacoste - "Save our Species" by BETC Paris Pantin, France. In which changing the logo was actually a new tasking act to reflect endangered species.

New Tasking was the most popular thinking pattern used in the Automotive sector. And overall was present in work awarded within almost every sector: 6 out of 8.
FYI – in BCR 2018 it was the most used thinking patterns and can be related to 15 awarded campaigns. It’s always a popular creativity booster and one of the most regularly used and most effective ways in which our mind generates creative ideas.

A very commonly used thinking pattern by the industry for many years now has been “Creating a Product/Service”. It is also the most visible thinking pattern amongst BCR 2019 winners. Spotted in 13 campaigns. This thinking pattern suggests a brand message/offering is delivered by NOT directly communicating the brand message/offering. But rather by inventing and launching a tactical new offering in the form of an unexpected product or service, which helps attract unpaid media and public attention to the… original message/offering. The new product/service is launched, promoted and experienced by a selective group of consumers in real life. And just as importantly, it then generates entertaining branded content which helps illustrate the message/offering to everyone else.
In recent years the amount of New Service ideas reflected in this pattern is constantly growing.

The “Creating a Product/Service” thinking pattern is spread out through all business sectors. With Finance using it the most: 3 awarded campaigns.
The new product/service launched can be unique because of what it offers and helps people achieve, as in: 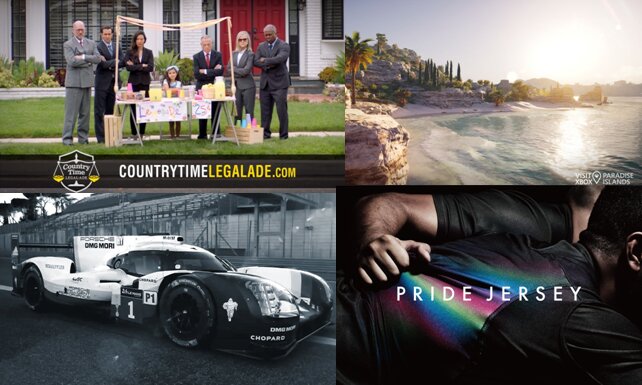 Kraft Heinz Country Time Lemonade - "Legal-ade" by Leo Burnett Chicago, United States
XBOX - "Visit Xbox" by McCann London London, United Kingdom
Or because of the way it is created or produced, as in:
Porsche - "The 24 Minutes of Le Mans" by Grabarz & Partner Hamburg, Germany
AIG Japan - "Pride jersey" by TBWA\HAKUHODO Tokyo, Japan
FYI – in BCR 2018 this thinking pattern can be found in 8 awarded ideas.

Data has been a major talking point and inspiration source for breakthrough creativity in recent years. But… as Dan Ariely, Professor of Psychology and Behavioral Economics at Duke University & renowned behavioral economics guru once said: “Big data is like teenage sex: everyone talks about it, nobody really knows how to do it, everyone thinks everyone else is doing it, so everyone claims they are doing it”. Yet there is one clear mechanism using data which is easily spotted in BCR 2019: “Translating”.
The principle is simple (although the implementation is not…): translating an abstract or complicated form of input (usually = big data) into a clear concrete form of output people can understand, apply and appreciate. Translating a ‘language’ people cannot comprehend into a ‘language’ people can speak and use. These ideas are usually overwhelming because of the machine learning protocols or sophisticated algorithms or unique diagnostic tests required to bring them to life. Which are key in making them happen and making an impact. But at the core of the creative thinking resides a simple thinking ‘detonator’: translating A into B. Leading to an innovative interaction with the brand.
Let’s translate this theory into examples: 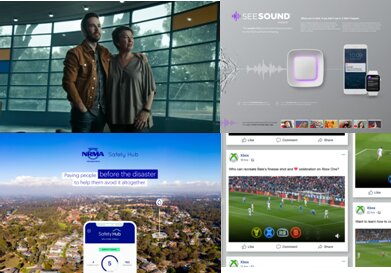 Pernod Ricard - "The Time We Have Left" by Leo Burnett Madrid Madrid, Spain
Wavio - "See Sound" by Area 23 New York, United States
Microsoft - "Football Decoded" by McCann London London, United Kingdom
NRMA - "Safety Hub" by CHE Proximity South Yarra VIC, Australia. In which accumulated claims data is translated into relevant concrete tasks for people to perform at their specific property, so as to reduce the risk of future damage. Thereby allowing NRMA to provide a disruptive service as an insurance company: paying out before a disaster happens to prevent the disaster from even happening.

As you can imagine, this pattern was mostly used in the Tech sector: in 5 campaigns. Illustrating the aspiration and commitment of Tech brands to transform their advanced measurement and technological abilities into cherished applicable consumer capabilities.
In 2018 this pattern can be associated with only 3 awarded ideas whereas in 2019 it can be reflected in much more.

i)
“Using a Problem” to deliver a new exciting offering/message to consumers, in which a brand admits to a problem and adapts because if it or adopts a problem because it can communicate a strength, was used 4 times in BCR 2019 ideas. Half of them were ideas from the… Luxury sector:
Diesel - "Ha(u)te Couture" by Publicis Italy Milan, Italy
Les Fleurs du Déchet - "I AM TRASH” by Ogilvy Paris, France
You might also argue that “Diesel - "Deisel: Go With the Fake", which was awarded in Retail, can be associated with the Luxury category. Making it 3 ideas out of 5. And if we count Vogue’s role in the "The Non-Issue" idea winning in Luxury, that makes it 4 out of 6. Very interesting output for the Luxury business sector.

And that’s it for 2019. Thank you for your amazing creativity which made for a very interesting playtime. Looking forward to the next playtime date in 2020.