HERC the agency has created the new campaign for Dutch recruitment agency YoungCapital using young makers from start to finish. Literally putting the new pay-off it has created for YoungCapital 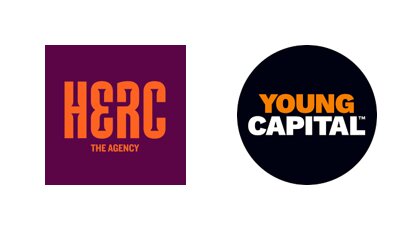 The 'superfast' (read: both edit and music) was made for and by today's Insta generation, and communicates how YoungCapital offers them work with popular, attractive international brands where they can take their first steps in the labor market.

Niels Heimens, co-founder and Account Director at HERC: "The campaign for online, digital OOH, outdoor, radio and TV is recognizable, but above all impactful. 'We Give Work' by YoungCapital is geared to youth culture, so as to ensure it stands out as much as possible for the target group. And made by young people who are themselves pacesetters and creators of that culture."

Emilio de Haan, co-founder and Creative Director at HERC: "We've been working with YoungCapital for a few years now and know with the campaigns how to position the lifestyle brand in such a way that it resonates popular culture. We've done that again, but this time gone a step further, by producing the campaign entirely in-house with makers who form part of that popular culture.

"We worked with young people who also work for fashion labels and cultural/creative platforms like SMIB, The New Originals, Obey and Applesap. Their collage-like work and way of seeing things were the starting point for the campaign. We found all of them (Camille Boumans, Kirwin Lonwijk, Gyatso Davids, Safi Graauw, Joëlle Strijk and Estelle das Dores) via Instagram. It was pure coincidence that three of them — Camille, Kirwin and Gyatso — were fellow first-year students at the Willem de Kooning Academy in Rotterdam. And the youngest of them, Estelle, is still at an MBO (vocational college)."

By adopting this approach, HERC literally practices what it preaches in the campaign: We Give Work. De Haan: "Agencies have worked with young people before, but this time they played a key role from start to finish. They were involved in everything from concept and design to camera work, the edit and photography. Allowing us as an agency to enjoy the full benefit of their skills and energy. And them to take their first steps in a world they didn't know before: working for a big brand, with all the deliverables and pressure that go with that. Connecting that brand with popular culture — which is what we're known for. And gaining experience together and continuing to learn, exactly the things that YoungCapital are known for."

Heimens: "I think it's pretty special that a brand like YoungCapital dares to embrace our approach. And at the same time continues to push us. For them, it can't be in-your-face enough. That's exceptional in a world where brands generally don't dare to really go for it. The courage of the owners is in the company's genes. You can see that and hopefully that energy also comes across in the campaign."

Margriet de Kroon, Marketing Director at YoungCapital: "The first two campaigns — Work and Make Money. Work — both contributed enormously to our brand recognition and brand image. Now it's time to deepen our brand, by explaining what we actually do: we show young people what jobs are available and offer them work that suits them. Whether that's a starter's position or part-time job alongside their studies. And while we've maintained the powerful 'Work' as a theme, and the primary association with our brand, we felt the tone and atmosphere could be a bit more appealing, more 'feminine' for our broad target group. And hopefully we've managed to achieve that with this campaign.

"With 'We Give Work' we both say and literally show people what we do. The fact that the entire campaign was made together with a group of talented young people fits seamlessly with our vision: give young people opportunities. YoungCapital believes in their strengths. Having grown up in the digital world, young people have fresh ideas about work. They're ambitious, creative, flexible and connected. They drive innovation within organizations, thereby helping to break taboos that stand in the way of change and growth." "And" she adds with a knowing wink, "That also applies to the world of advertising."

Situation Expands With Opening Of London Office
Want to make your company shine?
Showcase Your Work
Add up to 4 pieces of creative work to your company profile.
Boost Your Visibility
Appear above the rest when global brands search for you.
Encourage Direct Contact
Make it easier for clients to reach you by having the right people listed in your profile.
» Switch to a Starter Profile
Start now more info
Otherwise keep editing your FREE page
Any questions?