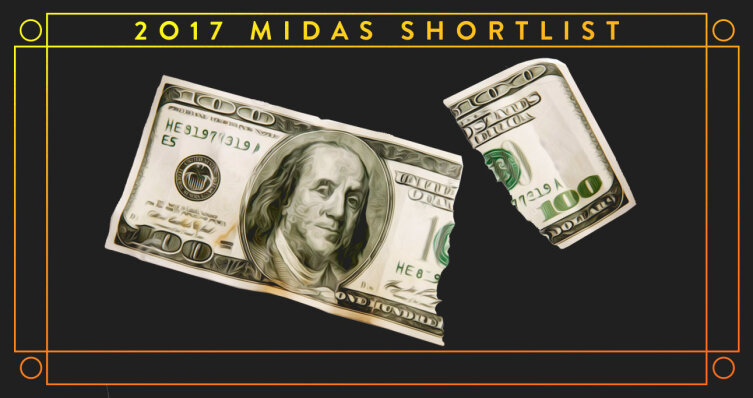 The Midas Awards® for the World’s Best Financial Advertising℠ announced the shortlist for the 2017 competition. Worldwide since 2001, the Midas Awards is the only awards show to recognize excellence in financial advertising and marketing on a global scale.

The 2017 Midas Awards Grand Jury, comprised of international executives from financial and creative marketing disciplines, shortlisted 242 entries showcasing creative excellence submitted from 21 countries around the globe. The competition expanded its global footprint with entries from Myanmar moving on to the Medal round.

The spotlight was on global agencies competing for the number one spot on the Midas Report. The following agencies are top forerunners for the 2017 annual ranking: McCann New York with 31 entries achieving shortlist status; Cullinan, South Africa with 23 entries shortlisted; OneTeam with 19, McCann London with 12 entries moving on the medal round; and R/GA Sao Paulo and MRM // McCann New York each with 10 entries; Havas Düsseldorf and Saatchi & Saatchi Sydney each advanced with 8; and MullenLowe Boston, Fp7/MENA, and McCann Canada moved ahead with 7 entries shortlisted.

McCann New York moved forward with 9 shortlisted entries for “Fearless Girl” for their campaign designed to promote State Street Global Advisors’ SHE fund: an investment fund for companies with more women in leadership. The statue of a young girl standing up to Wall Street’s iconic Charging Bull became a powerful piece of city art and a social media phenomenon.  In just 12 weeks the campaign achieved 4.6 billion Twitter impressions in 12 weeks, 745 billion Instagram impressions, a 379% increase in State Street share of voice, and a 384% increase in SHE funds traded daily.

Cullinan South Africa’s “Give Art Life” had 22 entries advance for client Absa/Barclays. The campaign was launched to inspire young artists in Africa and to create awareness for the Annual L’Atelier Art Competition. Cullinan created art pieces employed art and human canvasses to give art life. The results—awareness of the L’Atelier was raised substantially with an earned media valued at R13.5 million and young artists were given the power to change the world. “Conquer as One” for Absa also moved forward.

Global agencies employed a variety of strategic initiatives to engage consumers on behalf of the brand. R/GA Sao Paulo saw 10 entries shortlisted for “Next Bank,” their campaign for client Bradesco Bank. The campaign promoted the brand’s entirely new mobile-only bank that empowers digital-savvy millennials while seamlessly integrating into their lifestyle. Fp7/MENA’s saw 7 entries advance for their emotional campaign for Byblos Bank, “There’s No Home Like Home.”  The campaign tackled the decline in home loans in Lebanon by targeting Lebanese ex-pats abroad to introduce The Expat Housing Loans. Havas Düsseldorf’s saw 8 entries shortlisted for “Evil Zero” for DWS Investments, the campaign utilized, TV and print, online, promotions, an augmented reality app, giveaways, interactive installations, and guerrilla marketing to attract the attention of potential investors.

Shortlisted entries will move on to the secondary trophy round and will be judged by the Executive Jury who will award Gold and Silver Ingots to the highest scoring entries and determine the winner for the Midas Award for Innovation and the Grand Midas Award. The results of the juries are parsed in an annual rankings brief, The Midas Report, —a veritable who’s-who in the world of financial services advertising that includes the 3 individual reports: Agency, Brand and Network.

Press inquiries are welcome and should be directed to Gayle Mandel: Gayle.Mandel@New York Festivals.com, (212) 643 4800.

About the Midas Awards

Founded in 2001, the Midas Awards® is the only competition to recognize excellence in financial advertising and marketing on a global scale, honoring the World’s Best Financial Advertising℠ in banking, brokerage, insurance, mutual funds, credit cards, real estate, accounting, and consulting. The competition invites entries in four specific categories: Products & Services, Craft, Use of Medium, and Use of Discipline.

Celebrating the World’s Best Work since 1957!